I'm a recovering couch potato, and unhealthy eater. I committed to making a change as far as my health, and to take on the world of running. It's been a blast so far, and I am looking forward to bigger challenges in my future!

Saturday I drove out to the Dash Down Greenville 5K, and got there early enough to get a training run in.  I was a little concerned that I had not had a long running day in weeks.  My longest had been a 10 mile run over three weeks ago.  I did an 8 mile run, and then a total of 9.38 miles on this past Saturday (3.11 mi + 6.27mi).  It was at mile 4.5 on that training run when my hip started to feel REALLY tight.  I stopped and stretched on that run, and then did some more hip stretching before the gun went off for the 5K.

It was probably at mile 2 of the 5K, when I started to really hurt. I took short walking breaks to give my hip some rest, and finished the race at 35:28.00, which is three minutes slower than my average 5k race time.

I walked around the finisher’s area, grabbing beers, and race paraphernalia. As I started to walk back to my Jeep, my hip got worse; I could hardly walk.  I gimped across to the parking lot, and found that the area I parked in was Party Central for the parade.  If any of you are familiar with the Greenville Avenue St Patrick’s Day Parade, you will know or should know that the CVS parking lot at Lovers & Greenville is a melee of tents, parties, cookouts, kegs, freaks, and booze-a-plenty.  If you did not have a drink in hand or a jello shot in your face, someone was giving one to you.

No matter how much beer I drank, the pain was keeping me pretty sober.  I really just wanted to get out of there and go home, but my jeep was blocked in by the HUGE crowd of party goers.

Thankfully Christie was going to be just a train stop south of the parade, so I hopped on a DART train and met her at Whole Foods.  I had the hardest time walking.  I had to walk a block to get from the train station to the store, and I thought that at one point I was gonna start crying. I sucked it up, and just kept telling myself that I was almost there. Once I arrived I grabbed a couple more beers, and some food.

The next day it felt a little better, but the “better” never really progressed the following day. Tuesday I made an appointment with a Chiropractor, and will be  going in every day until race day.

The doctor has a massage therapist on staff, so she tries to work out the kinks for a half an hour, and then he tries to adjust my hip.  At one point he had his elbow dug into my glute muscle, with his entire 185 pounds of body weight pushing into that trigger point.  I had to just deep breath in order to take it.  I did not care what had to be done, I just wanted this pain gone.  I have the Dallas Rock ‘n’ Roll half Marathon on Sunday, so this needs to be remedied QUICK!

Yes I have been a VERY bad bad BAD blogger.  I have not fallen off the wayside, and immersed myself in Krispy Kreme donuts, and laziness – promise!

I’m still actively training for the Dallas Rock ‘n’ Roll Half Marathon.  The past week has been a little touchy though, due to a tight hip flexor.  I need more stretching!  The half marathon is in 10 days, and the most I have ran thus far is 10.25 miles.  This weekend is the annual St Patrick’s Day Dash Down Greenville 5K, so I am going to have to figure out how to squeeze in some long mileage.  It’s a little overwhelming to get that game plan together, because I know that on Saturday afternoon ( or even morning after I cross the finish line) I will be consuming some green beer.  Running the day after drinking is NOT my forte.  I might even have to run to the race from my house!  Would that not be crazy?? 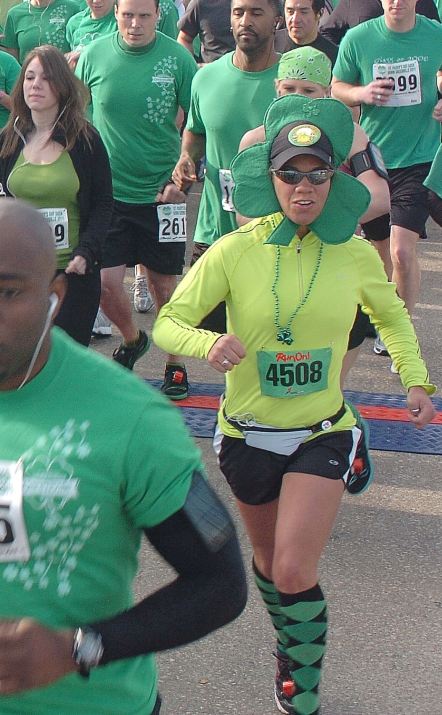 This was from the 2011 Dash Down Greenville. I think the shamrock added a little wind resistance, but the stockings were just downright DANDY!

After my brief hiatus from running, I am ready for my next distance race.  I am scaling it back a bit and doing the Dallas Rock ‘n’ Roll Half Marathon again this year.  Not only am I running it, but I am also raising money to help my favorite dog; the Pit Bull.  I am part of a great team of people who are out to spread the good word and raise awareness about the Pit Bull breed, as well as raise funds to support rescues in our area who are taking these dogs under their wings, and finding them good responsible homes!

We will be running the Dallas Rock ‘n’ Roll Half Marathon on March 25th! We are hoping that people are at the finish line, to greet us, with their Pit Bulls ( as well as non-Bully dogs). That would be so awesome!  Our team name is called Pit Bull Warriors.  We are even in the works to have shirts made to wear while we run!

I’m enjoying being a part of a running group, and our long running days are always with our dogs.  It’s great to get our furbabies out there for some good exercise!

Please contribute to our cause, by going to this chip-in link. Also when you do contribute, make sure and include my name in the comments section. Thank you everyone!!! Please donate via the chip in link, if you can, and please spread the word about our mission!

A huge thank you from Team Pit Bull Warrior! 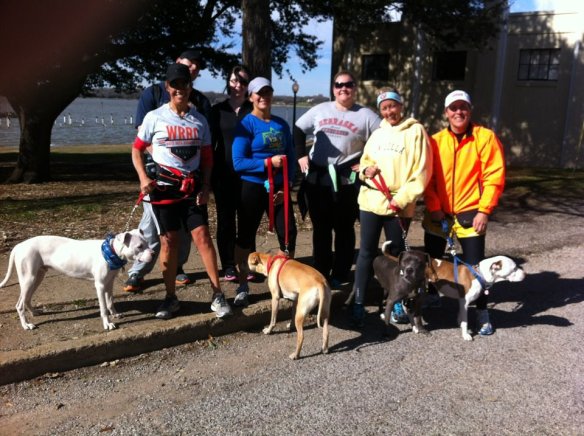 A great group for a great cause!

I am finally getting back to normal with my respiratory health.  The sinus and upper respiratory infection  I battled with for weeks, finally met it’s match with the new set of meds the doctor gave me.  I even was able to get in some running last week.  I’m on my way.

Friday I really started battling a bit of tattoo fever.  I was planning on getting some small ink done this next Sunday at a benefit for Dog Star Pit Bull Rescue, but I also really wanted something to commemorate completing my first marathon; no a medal and a finisher’s shirt just was not enough.  I mulled over what to get, but I could never settle on a design.  I wanted something different, and something bold.

Saturday as we were coming home from brunch, we made a last second detour to our local tattoo shop; Saints & Sinners in Oak Cliff.  I think it may have been the brunch bloody marys or the chocolate wine that pushed me to just get this done.

I spoke to the artist and gave him what elements I wanted in my tattoo; 26.2 in roman numerals, the Japanese character for warrior, lots of boldness, and no flowery stuff. He went to work on it and had me come back in 30 minutes.

When I did, he had three concept drawings for me to look at.  Two were good but just not enough wow factor for me; the third one blew me away.  His concept had everything and had it bold as can be,  I loved it!

Within 30 minutes he had the stencil all drawn up, and was ready to start my ink!

I laid on that table for about 2 1/2 hours, and let me tell you this; my buzz left me about an hour into the session.  WOW!  It was painful as hell in some spots, but painful in general because of the fact that I have no meat on my left leg. It has always been atrophied.   Also I have a scar there from when I had my Achilles tendon lengthened about four decades ago.  Yeah you would think that after 40 freaking years that a scar would not have much of an impact.  WRONG!

It was so worth it though.  I LOVE my marathon tattoo!

Here are photos of the process:

“Neither snow, nor rain, nor heat, nor gloom of night stays these couriers from the swift completion of their appointed rounds.”  The unofficial US Postman’s Oath derived from Herodotus’ Histories (8.98), referring to the courier service of the ancient Persian Empire.

On Sunday December 4th, those of us who were brave enough to fight the elements to run the Dallas White Rock Marathon, felt that message in our bellies.  No matter the rain, no matter the cold, no matter the wind; we would run this race.

I had everything that I needed to get through this race; I trained diligently and had all the gear I could find that would help me get past the cold and the rain.  It was one of the most mentally challenging moments in recent years I have had to work through. I had no choice; I needed to!

My alarm went off at 4 am and as I slid out of bed, I was trying to focus on what I needed to take care of before leaving. My head was a little foggy, because I tossed and turned all night; hearing thunder seeing flashes of lightning, and that pounding rain. I focused on my to do list – get dressed, feed the pups, get them out to potty, and the corral them back into their crates.

I went into the kitchen and made a small cup of coffee, and a toasted peanut butter, agave, and banana sandwich.  As I took a moment to eat, I thought about the task at hand. I kept checking my list of gear that I was taking with me, and making sure that I had everything ready to go.  This list helped keep me grounded.

I didn’t know what to expect as far as the race. I was pretty nervous and a little apprehensive, but I knew that this was something I needed to do. This race was something I trained for; very hard. I was not going to let rain get in the way of making my goal. If the race was stopped by race officials, then that was one thing, but I wasn’t going to stop this race.  I was in the same boat as 29,999 other people so who was I to complain or puss out?

I finished my breakfast, pet the pups good-bye, grabbed the running gear that I bagged up the day before, and headed out to Fair Park. It was go time.

END_OF_DOCUMENT_TOKEN_TO_BE_REPLACED

If you're new to my little blog, you may want to start by reading my About Page, just to get the jest of what I'm about and what I am writing! Hope you find my ramblings to be inspiring, entertaining, or otherwise worth the read!