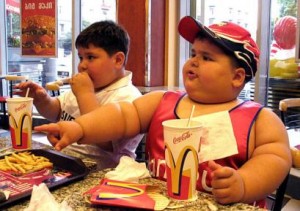 Why would you do this to your child?

In the interest of public health, and especially the health of children, I wanted to pass this along. In the United States there is an epidemic of childhood obesity. This MUST end!  Parents, this begins with you. Junior doesn’t buy the crap on his own, YOU are the provider. If you care about your child’s well-being, then you need provide something healthier for your kiddos – THAT is true love right there!

9 Foods Not to Give Your Kids

If you’ve followed the news on childhood obesity lately, you know the state of affairs is pretty grim. Childhood obesity rates have tripled over the past two decades, and most signs point to the next generation being the first whose life expectancy will be shorter than their parents’. Much of the blame for this trend has deservedly been laid at the feet of the producers and marketers of unhealthy food aimed at our youngest consumers, whose parents face an uphill battle: trying to pit fresh, healthy foods devoid of mascots or sidekicks against superheroes and cartoon animals in a struggle to tempt their children’s palates and stomachs.

Since most kids have hummingbird metabolisms that adults can only envy, it’s often easy to give them a free pass and let them eat whatever they want. But eventually those metabolisms slow down and the pounds settle in. Also, as physical activity decreases and processed food intake increases annually, kids aren’t burning calories the way their parents might have when they were their age. And even if the kids aren’t getting fat, they are establishing eating habits they’ll take into adulthood. As parents, you can help foster a love for healthy eating and exercise that will last your kids a lifetime—hopefully a long one!

Eating can so often be a classic power struggle where kids try to finally locate their mom and dad’s last nerve. (I can remember family dinners with my brother and parents that could teach Hezbollah a thing or two about standoffs.) There are a number of strategies you can use to mitigate this type of deadlock. One is to let your kids help with the selection and preparation of the food. If they picked out the veggies at the farmers’ market and helped cook them, they might be less inclined to feed them to the family pet. Another is to frame eating vegetables and healthy food as being its own reward. Otherwise, by offering dessert as a reward for finishing vegetables, you create a system where unhealthy food is a treat and healthy food sucks. With these thoughts in mind, let’s take a look at some of the most unhealthy foods being marketed to your kids today, and some healthier alternatives you can offer to replace each of them.

Note: The following recommendations are for school-aged children. Infants and toddlers have different specific nutritional needs, not addressed in this article.

Instead: If you’re cooking at home, grill a chicken breast and cut it into dipping-size pieces either with a knife or, for extra fun, cookie cutters. Make a healthy dipping sauce from HFCS-free ketchup, marinara sauce, mustard, or yogurt. Let your kids help make the shapes or mix up the sauce. Try and go without breading, but if you must, try dipping the chicken breast in a beaten egg, and then rolling it in cornflake crumbs before you bake it. It’ll be crunchy and delicious, but not as fatty.

Instead: Read the labels and try to find cereal that’s low in sugar and high in fiber and whole grains. Remember, “wheat” is not the same as “whole wheat.” Also, avoid cereals (including some granolas) that have hydrogenated oils, artificial colors, or chemical preservatives. Add raisins, sliced bananas, berries, or other seasonal fruit to the cereal for extra flavor and nutrition. Again, letting your child help design a healthy bowl of cereal from choices you provide will get you a little more buy-in at the breakfast table.

Instead: Get unprocessed meats, like lean turkey breast, chicken, tuna, or roast beef. Use whole wheat bread for sandwiches; or if your kid’s dying for Lunchables, fill a small plastic container with whole-grain, low-fat crackers, lean, unprocessed meat, and low-fat cheese. This can be another great time to get out the cookie cutters to make healthy sandwiches more fun. For hot dogs, read labels carefully. Turkey dogs are usually a good bet, but some are pumped up with a fair amount of chemicals and extra fat to disguise their fowl origins. Look for low levels of fat, low sodium, and a list of ingredients you recognize. There are some tasty veggie dogs on the market, although a good deal of trial and error may be involved for the choosy child.

Instead: Water is still the best thirst quencher. Explain the importance of good hydration to your kids, and try to set a good example yourself by carrying around a healthy reusable hard plastic or stainless steel water bottle. Get your kids used to carrying a small bottle of water in their backpack or attached to their bike. If they’re very water averse, try water with a splash of fruit juice in it. But just a splash. The idea is to get your kids used to not having things be overly sweet, overly salty, or overly fatty. Another great beverage is milk. Growing kids need plenty of milk (or fortified nondairy milks, like soy or almond)—which is filled with nutrients, calcium, and (in the case of dairy and soy) protein—but they don’t need too much fat, so choosing low-fat or nonfat options will help ensure that they get their milk without actually beginning to resemble a cow.

Instead: Vegetables like baby carrots, celery sticks, and other crudités are great options, but if potatoes must be had, there are some options that don’t involve melting a brick of fat. A scooped-out potato skin with low-fat chili and a little cheese can provide lots of fiber and vitamins, with even higher amounts if the chili has beans. You can also try making baked fries, using slices of potato with a light brushing of olive oil. Or the classic baked potato could be a hit, with plain yogurt or cottage cheese instead of sour cream and butter.

Instead: Kids gotta snack, and in fact, since their stomachs are smaller, they aren’t usually able to go as long between meals as adults. Cut-up vegetables are the best thing if your kids want to get their crunch on, but air-popped popcorn and some baked chips are okay, too. You can control how much salt goes on the popcorn, or involve your child in experimenting with other toppings like red pepper, Parmesan cheese, or dried herbs. Try making your own trail mix with your kids. They might be more excited to eat their own personal blend, and that way you can avoid certain store-bought trail mixes, which sometimes contain ingredients like chocolate chips and marshmallows that aren’t exactly on the healthy snack trail.

Instead: If your child doesn’t show interest in fruit in its natural state, there are some ways you can make it more interesting without losing its nutritional value. For a healthy frozen treat, try filling ice-cube or frozen-pop trays with fruit juice or freezing grapes. Or buy unflavored gelatin and mix it with fruit juice and/or pieces of fruit to make gelatin treats without the added sugar and color (let it solidify in big flat casserole dishes or roasting pans—another good time for the cookie cutters!) Try serving some raisins, dried apricots, apples, peaches, or other dried fruits that might give you that chewy, leathery texture without the sugar.

Instead: Honestly, a slice of whole wheat toast spread with sugar-free fruit spread or peanut butter isn’t going to get as many fans as a chocolate-filled Krispy Kreme® doughnut, but at some point, you have to stand firm. Be the cop who doesn’t like doughnuts. Doughnuts—not for breakfast. Period.

Instead: Try making your own pizza with your kids. Use premade whole wheat crusts, or whole wheat tortillas, English muffins, or bread as a base. Then brush on HFCS-free sauce, and set up a workstation with healthy ingredients like diced chicken breast, sliced turkey dogs, and vegetables that each child can use to build his or her own pizza. Then sprinkle on a little cheese, bake, and serve. If your child gets used to eating pizza like this, delivery pizzas may seem unbearably greasy after awhile.

Someday your children will come to realize that caped men in tights and sponges who live under the sea might not have their best interests at heart when it comes to food. Until then, however, why not involve them in the process of selecting and preparing healthier alternatives? Some of these cleverly disguised wholesome foods might become their favorites. Who knows, they may even tempt some of the overgrown children among us!