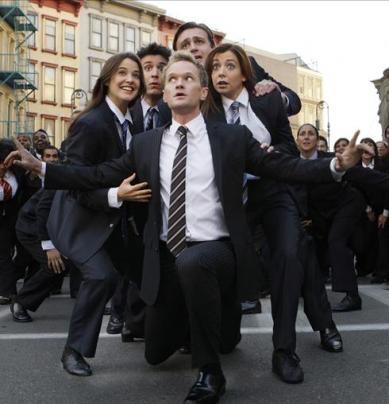 The past ten days I lamented and stressed over the weather forecast for marathon day.  The chance of rain swayed from 80% to 10%, and then back up to 90%.  The temps were another tricky factor.  The days before and after were showing anywhere from highs in the 50’s to highs in the low-mid 40’s.

Wednesday on race week, I ran out at lunch, to Dick’s Sporting Goods and looked for a good rainproof/windproof running jacket.  There were only two brands and types there – Nike Women’s Element Shield Running Jacket and an Under Armour Women’s Armour Chill Soft Shell Jacket. 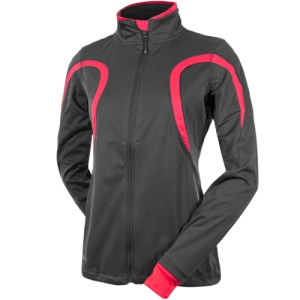 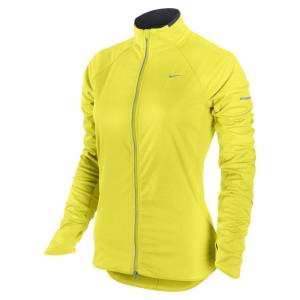 Since I had not had time to research these two models of jackets, because they were not listed on Dick’s website, I was forced to grab both of them and then do my research after the fact.  The jacket that offered the least amount of protection and usability for the cold rainy run, would be returned.  I soon learned that there was not really much information out their on either of these jackets. In fact the one from Under Armor was not even listed on their company website!  Not a good sign in my opinion.

On my way home from work, with both jackets still in the bag, I called Luke’s Locker to see what they had.  I explained what I had purchased earlier that day.  The woman I spoke to stated that neither of these jackets would offer the protection from the rain that I needed, and would eventually cause me to overheat during the race.  She said that they had some better jackets to choose from, and at a price that was better than what these two cost.

I raced over there and after looking at several choices, I decided on an Asic’s Spry jacket. It was said to be both water proof and windproof. It also was only $70; $30 less than the Nike jacket, and $65 less than the one from Under Armor. I thought I had scored a deal!  I returned the other two jackets, and hoped that the money would be credited to my account quickly; $245 is a lot of money to wait on! 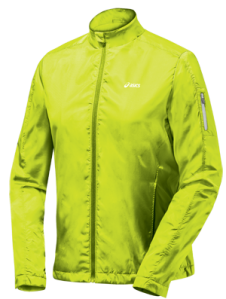 With the jacket situation out of the way, I could focus on the race weekend activities.

After the T-shirt event at Scottish Rite Hospital, I stopped off at the Expo to get my racing packet and t-shirt.  The crowd was buzzing more than I had expected on a Friday.  It was packed!  I weaved my way around, checking out the exhibits.  I usually go to the Expo on both days, and use Friday as my dry run through the Expo, so that on Saturday I can focus on things I REALLY want to look at.  I also needed to get a new pair of running gloves, because mine disappeared after The YMCA Turkey Trot.

I was sold on a pair of Brooks Adapt running gloves, which had an outer mitten-like shell that would cover your gloved fingers, to keep the rain out. 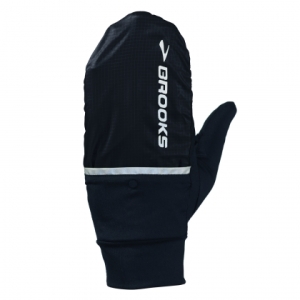 Keep rain out.  Yes yes.  That was the mission at hand.  I had the jacket, and now I had the gloves.

The next day I went back to the expo to make sure I did not miss anything, and to meet up with Joe Taracani of The Marathon Show. I wanted to meet him and interview with him for his show.  He was easy to find in the crowd; he walked around with a big red microphone, and a sign that read “On the Air”.  We spoke for a few minutes about Scottish Rite and about my own personal running experiences and challenges, being that I had cerebral palsy.  It was a good talk and I cannot wait to hear it when it broadcasts!

I also got some funny photo booth photos done with my friends Mia and Tina, who were running the Half Marathon. 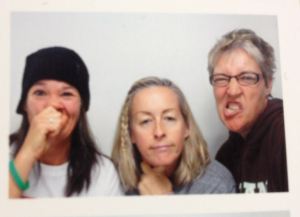 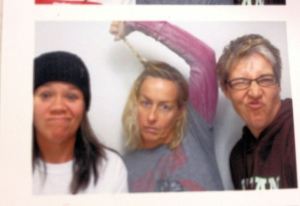 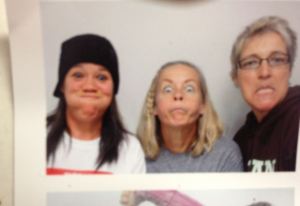 I tried to figure out how to keep the water out of my shoes, you know since the forecast had it raining for the duration of the race, but the only thing I could come up with were a pair of cycling shoe covers, which in their two years with me, I had never used.  I found one and actually was able to pull it on my shoe.  The cutout for the bottom actually fit the shoe’s crash pads PERFECTLY. It also showed no way of scuffing on the ground, so it looked as if it could last most of the race; if not all! Problem was I only had one shoe cover.  I turned my house upside down and was never able to find the left shoe cover.

Well for what it was worth I had everything else I needed to run in the cold, wind, and rain.  I was going to layer up and pray.

I also had a garbage bag to slip over my upper body, to help with the rain, as well as some throw away sweatpants to keep my legs warm while I waited for our corral to start.

The clothing we set.  Nothing to do now, but run my marathon.