Wow okay so it has been more than a few days since I updated my blog!  I did get my running in, but took it easy as far as the holiday weekend goes. The last week or so has taken off on me, due to a very hectic workload at the office, and from rescuing a sweet puppy that was at death’s door, at a local animal shelter.

As most people will tell you, I love animals.  I have taken in my share of rescues and strays, and they have provided me with much love and plenty of companionship.  All of my fur-babies, have been rescues, except for my first apartment cat Jonsey and my first puppy, a golden retriever, named Monroe.  The rest were found in parking lots, in rescue groups or with foster dads, in the alley, or they just wandered into the yard.

This year I lost two of my elder dogs – Brewster and Monroe; both of which had been with me since they were little pups. After Monroe died, I became actively involved in networking to rescue dogs that were in deplorable conditions, or were on the last days at the kill-shelter. My focus was on Pit Bulls.

I fully and whole-heartedly admit that I used to fear Pit Bulls, and I used to think that they were killers.  I was, in my own admittance, ignorant of the entire facts, and only going by what I perceived by living in my area of Dallas, and what the media showed. At first I was very nervous to be in the room with one.  One of my dear friends had two American Pit Bull Terriers, and I had this per-conceived notion that every time I visited her, that one of them was just waiting to jump on me and eat me.

That was years ago, and after really being around these dogs, I have to say that they have been some of the sweetest  animals I have seen.  I feel almost ashamed to have been so scared.  I actually had one show up at my house many years ago.  She was small and probably young.  She hid in my bushes.  She barked at everyone from there.  When I came out to investigate, she crawled out on her belly and came up to me almost immediately.  What did I do?  Acted upon ignorance and the misguided opinions of others, and took her to the shelter.

To this day the thought of that incident stings.

I suppose in a way, by networking the most abused and neglected breed of dog in the United States, I am paying penance for my mistake.  I love the breed, and hate that it get’s such a bad rap due to the neglectful and cruel people who abuse them.

I have two Pit Bull mixes – sharing one with Christie, and they are the sweetest boys. Definitely momma’s boys. Elvis definitely favors Christie, and stays with her most of the time. Ringo is my little baby and he is such a little charmer.

Last Friday while networking the last calls from the local shelters – the ones who only had until the end of the day to be saved, or face death – one came to my attention and got me to post on Facebook like crazy.  She was a young Pit Bull mix, and was said to be sweet, playful, and very loving. Her name was Kara.

I sent emails, and made phone calls.  I just wanted to save this girl’s life.  There was just something that drew me to her, and made me anxious to get her saved.  usually when I network these dogs, I do what I can, but then at the end of the day I have to leave it to God as to what the result will be.  That was the norm, except for Kara.

I thought that I had a home for her at one point, but it did not work out.  I emailed Christie, who was helping me network Kara, and told her that I had a lump in my throat over Kara.  She was quick to tell me that we could not have any more dogs.  We had three as it was, and then four indoor cats.

I sat at my desk and waited until 5 o’clock.  I had tears in my eyes. Ugh it was so painful.  Kara’s time was near and no one wanted her. I walked out to my Jeep, trying to tell myself that I did what I could do.  It sucked that over breeding and irresponsible pet ownership lead to this for Kara.

A few minutes after 5:00 I got a call from Christie.

I stammered, thought about if I could handle another dog right now, and if it would be fair to Ringo. I paused and finally got out the word, yes!

I work 14 miles from this shelter.  Christie used to work down the street from my office, until last week when her office moved within minutes of that shelter.  Kismet? I called the shelter to tell them that we were taking Kara.  I was told that we had 15 minutes to get there. Christie broke probably a dozen speeding laws to get there.  She made it just in time.

I hauled ass to get there myself.  I wanted to give Kara her ride to her new home.  When I got there, they were both standing outside waiting.

She was as adorable and even sweeter than she was described. She wiggled her butt and whimpered with excitement. She rode in the front seat of my Jeep – crawling to lay her head in my lap, all the way home.

Meet my second running partner – Lola.  She and Ringo are getting along great and both enjoy our morning walks and runs.  She is just awesome! 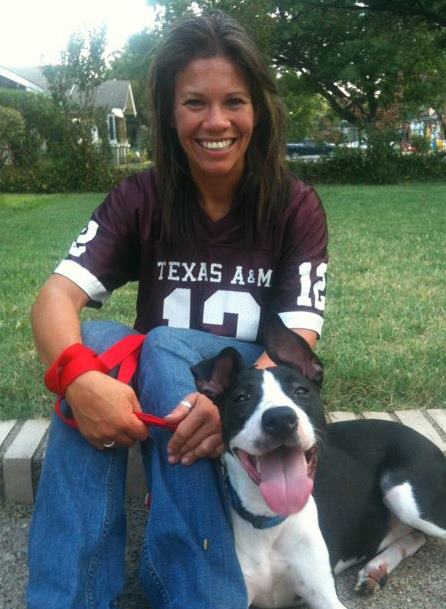 Want a great dog like Lola? Please consider adopting a shelter pup, especially a Pit Bull or Pit Bull-x.  If you are active and love to take long walks and running, they would love to be your wingman/wingwoman. And as always, be a responsible pet owner and spay/neuter your pets.  Train your new best friend to be the best that they can be, and show the world that these dogs are not the monsters as they are portrayed.