I have been on an endless search for an accurate GPS run tracker app for my iPhone. I started out using iMapMyRun religiously last year, but every once in a while the GPS will not lock in on me when I start my runs, so I end up not having an accurate tally of mileage when I am far into my run; I need to know this so I can gauge when I need to turn back.  I would say that 99% of my runs begin from the same location each time, and the signal has been good on previous occasions, but for some reason in the past 6 weeks, MapMyRun‘s GPS just doesn’t get going until I am about a mile away.  Can’t blame it on cloud cover, because we have been in an extreme drought situation for the entire summer.  I’m consistent on how I have my settings, so nothing changed there; yet still no GPS.

I could go out and buy a Garmin GPS watch, but that is beyond my budget right now.  I will be getting cast for new custom orthotics in two weeks, and will need new running shoes about the same time. Those could easily run me upwards of $400 – $450.  I need to put my cash into those first.

So off on an app expedition I went.

The icon itself made it look like a Marathon type  trainer. Yes I know there is not an extra .02 in a marathon, but at first glance the icon tricked me. 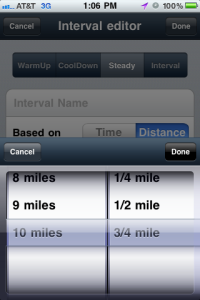 After I downloaded it, and got into the Tofurkey and potatoes of it, I was understandably bummed to find out that the maximum mileage you can set your steady run for is 10 3/4 miles. Yes there is a work around for this, that will allow you to just keep adding intervals to a work out, and yeah it looks like that would do the trick, however this app also does not support social network check-ins for Facebook and Twitter.  Boooo!  I do hope that it does integrate that in the future.

Gold star sticker for when I contacted support asking why it stopped at 10 3/4 miles. They were VERY prompt to get back with me on a work around.  They have a very good support team!

If it were based on their support team I would rank this better, but for the fact that it lacks the support for common social network sites, I give this –

The next one I tried was Runtastic Pro – $5.99.  Now this app had some promise.  A whole lot of bells and whistles, PLUS like the Nike+ app, which I refuse to use anymore, it allows people to cheer you on, as you run.  In fact it has several selections of cheers, “go! go! go!”, applause, the wave, and horns.  I mean seriously that is some awesome motivation when you are out on your own running your tail off on a long run day. 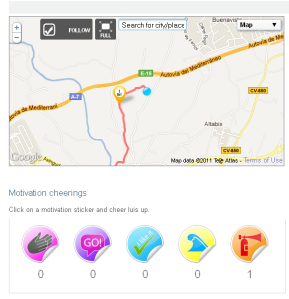 It posts on your Facebook page and Twitter when you begin your run, and tells your friends and followers to go to the website and select which cheer to send to your headphones.  Pretty cool huh??

There’s just one drawback; if someone wants to cheer you on, they have to sign up on the website first.  They can join for free, but it’s pretty much a pain the ass for people who will never use the application or who are not needing something to keep up with their physical activity. Also the company is based out of Austria, so a majority of the language used on the site is not English, especially where it is needed the most – the Support Forums. If you speak fluent Deutch then you would have no problems here.

I did use this app on my 15.88 mile run, but it was not terribly accurate, and no one cheered me or sent me happy horn sounds from the website, so I decided to look elsewhere.

The bells and whistles are awesome, but having to have my friends and family join a website to cheer me on, irks me.

3 toasts. I am hoping for better, but not holding my breath.

integrates with Facebook, Twitter, and DailyMile.  So your friends and family will know when you drag your butt out of the house for a Walk, Run, Bike Ride, etc.  Something else that does, which I find to be VERY freaking cool – it verbally relays any comments that are posted by people in response to you beginning your workout!  It doesn’t have a website to log into or join; so no hassles there.  The GPS does however take a few minutes to “warm up”, so again I am left with no mapping for at least a block to 1/4 mile, unless I start the app a few minutes before I head out the door.  I also ran into an issue with it mapping me while running in downtown Dallas; the buildings could have added to that issue.

I have continued to use this app for the past week, and overall I am happy with it. Yeah the GPS drop out bugs me, but I am beginning to think that this is a common issue with all of the apps. The Facebook, Twitter, and Daily Mile integration is spot on. I LOVE that it reads my Facebook comments to me as I run.  I may just stick with this one over all.

I give it 4 toasts!  If it provides a more reliable GPS, then a plate of 5 toasts will be given!

An honorable running toast mention goes to a training app I tinkered with early this year when I was just trying to stay in running shape.

Addidas’ micoach – FREE.  That’s right it is a free application, and it is not hindered at all.  It is fully functional.

I like this application because it has a ton of training programs that you can customize in order to become an all around better athlete. You join the website, which is also free, and you set up your program.  Want to be a better basketball player? There is a program for that.  Want to be a better football player? There is a program for that.  Better cyclist?  Yes that too.   Core Performance works in partnership with Adidas to develop training plans, content and coaching for micoach. It is a SERIOUSLY good training app. 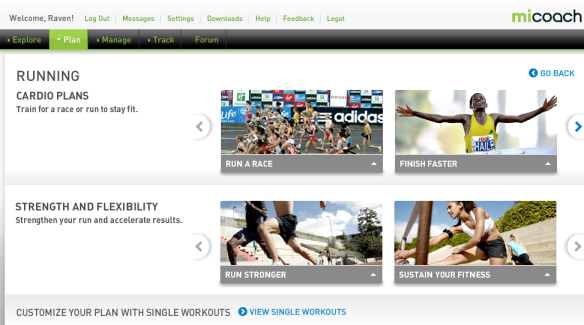 It has a vast selection of running programs to help you become a stronger runner.  It keeps you on pace, and runs intervals.  If you slow down, a voice pops on and tells your to speed up to your target zone, which is determined by pace or heart rate.  If you are going to fast it tells you to pull back.  It gradually builds up your running time, and your intensity. How does it know your intensity zones?  Your first workout is to do an Assessment.

The Assessment Workout is roughly a 12-minute training session in which you’re coached by audio instructions. The Assessment Workout uses a scale based on your perceived effort. This is a more accurate way to access cardiovascular fitness and build your personalized training zones than using general formulas.

You’ll start with a walk and slowly transition to higher levels of effort, and then you’ll cool down with a 2-minute walk. The efforts are described on a scale of 1 to 10 where 3 out of 10 is a walk and 9 out of 10 is considered your top speed. It’s up to you to interpret the scale, so when micoach says to speed up to 5 out of 10, make sure this is roughly half of your best effort.

I have also just learned that it is coming out for the Xbox Kinect and PS3 Move gaming systems as a feature packed fitness game in Spring 2012.  Sounds like Adidas micoach is running full steam ahead in the fitness industry.

You can also use accessories with this app to keep track of your heart rate,  and stride rate. This would allow you to set your training zones to your actual heart rate, thus you would know if you were REALLY not pushing hard enough, or pushing past your recommended limits.

So all of this goodness, why not use it?

As far as my marathon training?  The longest run it puts you out on, is 3 hours and 40 minutes, which is for a 22 mile run.  I’m considerably slower paced than this, so there is no way I can run that far in that amount of time.  So you need to be in good running shape to do this particular coaching program, and be able to hold at least a consistent 10 min/mile the whole time. Maybe one day I will be able to keep that pace up, but right now I am focused on getting the miles in, and not about how fast or slow I run.

Their support frustrates the crap out of me at times.  Slow response, if any.  They seem to ignore their support forums, which is disheartening. They have a Twitter account, but it hardly gets any use.

Unable to import GPX files/ maps.I have yet to have found a running app that doesn’t do this.

Unable to edit incorrectly drawn GPS maps.  If you have used any GPS device in your training for ANY length of time, then you know that it WILL make it look like you are running through someone’s living room.  Jogging by a funeral home puts one as risk for looking like they just crashed a funeral in an attempt to run their personal best.  Last year a faulty GPS signal had me running on water at White Rock Lake!

Adidas micoach has so much potential that is not getting tapped into. They need to fine tune things. If they did, they would be the big daddy bad ass of all training apps!

The social networking thing?  Well it does post to Facebook and with Twitter but only when you have completed your workout. So no one knows that you are out tearing it up, and no one can send you motivational comments.  Dang Adidas, if Nike can do this, you all should be able to.  As far as training, micoach kicks the Michael-Vick-loving pants off of Nike+!

I give it 3 toasts with a dash of agave.

Why running toast?  I like toast. It’s my pre-run and post-run snack, with some agave nectar, peanut butter and….