Ringo my little Pit Bull mix, loves me very much; so much that he cannot stand it when I go out on my training runs, and leave him behind in his crate. I put chew toys galore in there, and he will gnaw on them like crazy, but as soon as he sees me open the door to leave, he is standing up at attention, head cocked to the side as if to say, “HEY!! Where do you think you’re going???”.  As I close the door and lock it, he starts whining, barking, and yapping like crazy.  He hits those high notes like a well training opera singer. 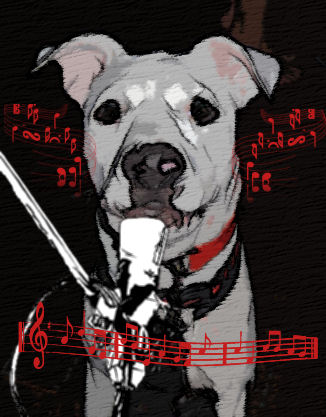 Last week as I left the house, I could hear him start to go bonkers.  As I trotted down the street, I could faintly hear him.  I just couldn’t leave him acting like this, and waking people up, so I ran back to the house, grabbed his leash and decided to take him on a test run with me.  I figured even if we walked more than ran, I would feel better about getting him exercised, while still getting some running time in. I tied the leash around my waist, and off we went into the early morning darkness.

Surprisingly he did VERY well, and trotted next to me the whole time.  At the half-way point, we walked over to some lawn sprinklers that were going off, and I doused some water on his head and gave him a little to drink from my hand.  He was good to go, and ready to run back to the house.

Since he enjoys our one-on-one early morning outings, I have decided to make it part of my weekday running routine.  He’ll run with me on my short mileage days if he is up to it.  He is still young, so I do not want to over-do it, but as long as we keep it at 3 miles I think he will be okay.  I’m not a fast runner in any sense of the word, so he really doesn’t get a full-blown run, he just trots along.

I am realizing now that this gets me out the door easier.  I have a few minutes before I get out of bed, when I am thinking, “Do I REALLY have to do this now??”  I tend to drag my feet while getting ready for these early morning sabbaticals with the pavement.   When I look at his happy face, see that tail wagging, and his butt wiggling I can’t help but to hurry up and get out the door with him.

Someone once said that a wagging tail reminds us that running should be joyful. A dog’s relaxed stride and frisky vigor are contagious. Dogs even look like they’re smiling.  It’s hard to say no to that!